A Harvard Business Review study from 2011 found out that a large percentage of companies take much too long to respond to online sales leads. Is your company one of them? Are you certain that inquiries received from your online customers are promptly attended to?

The study observed that of the 2,241 participating American companies, most experience some delay in following up on sales leads. 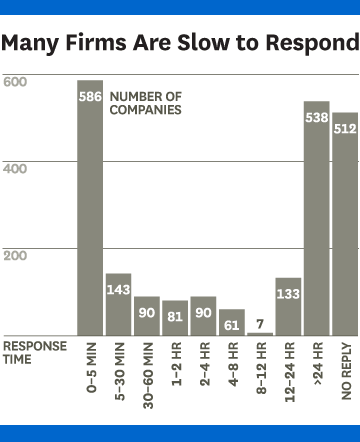 Around 37 percent of companies responded to online test leads within an hour, while 16 percent took between one and 24 hours to respond. An alarming 24 percent of the sampled companies needed more than 24 hours to respond, while the remaining 23 percent never even bothered to respond to leads at all. Finally, an average time of 42 hours was recorded for companies that provided responses within 30 days.

Harvard Business Review performed other research involving 1.25 million sales leads obtained by thirteen Business-to-Business (B2B) and twenty-nine Business-to-Consumer (B2C) companies in America, and found that firms responding to leads within an hour were seven times more likely to win the business than those that responded an hour later and over 60 times more likely than those that responded 24 hours later or longer.

These outcomes are rather surprising in the light of the efforts and resources most companies put into generating online leads. The observed average response time is extremely poor, especially considering the fact that it does not take long for online sales leads to lose interest.

An increasing number of companies are shifting attention to the internet and lead brokers when it comes to sales lead generation. Spending by these companies on online advertising with the aim of generating leads jumped to $22.7 billion in 2009, from $12.5 billion four years earlier, and while still calculating the figures for 2013, the numbers already appear even more staggering.

Online lead brokerage firms, which help companies in generating sales leads, are performing well not only in the B2C market, but also in the Business-to-Business (B2B) market.

While all lead brokerages give consumers an easy way of getting quotes from several companies by selling leads to companies, iChoiceRater.com gives lead affiliates a way to convert visitors who don’t buy from them into one or more leads who just might.

Most companies are not able to respond quickly to leads for several reasons. One of these is the practice of pulling leads from CRM systems databases once a day, instead of doing so continuously or having leads transferred by phone.

It’s obvious that companies need to upgrade their techniques and procedures to fully tap into the benefits of online sales leads, which brings us to the very reason iChoiceRater.com got into the sales leads business in the first place!